Plants that are not Green 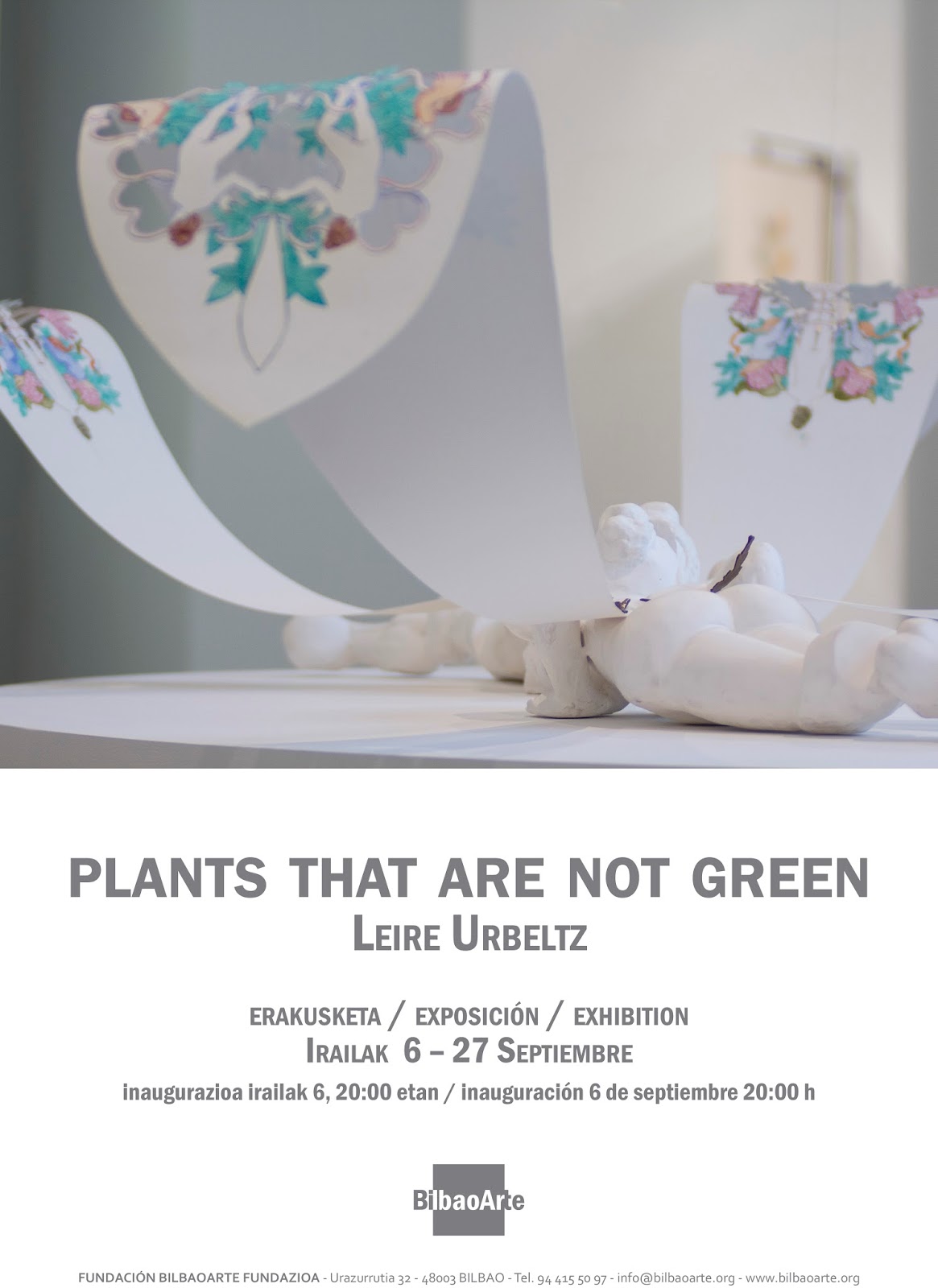 One really has to be sitting down to read a textbook. It cannot be done standing up or lying down. As a rule it is something done by an individual reader although it may also be done collectively. One common practice consists in simultaneous reading: supervised by the authority figure and following a rhythm marked out loud, either by the authority or in their name, where the group advances in unison, following the same words at the same time, making the same brief pauses at commas, or slightly longer ones at full stops, stopping to take a breath at new paragraphs, and feeling the same stupor at semi-colons.

Whether done as an individual or as a group, the ideal inspiring the textbook is that of a community of readers all taking part in the same knowledge. The uniformity of learning is an aspiration shared amongst the most varied pedagogic beliefs, and can be interpreted as an instrumental homogenisation of knowledge. Study plans and curricular reforms strive to foster a homogeneous mass of 'critical, thinking' beings, democratically endowed with the same definitions, characteristics, examples, causes and consequences, formulae, demonstrations... Yet it is not enough to simply inform rather than form the mind, it must be shown that 'readers of texts' are able to retain and reproduce the structured contents of its pages. And the transcendental task of testing this is termed evaluation. Thereby evaluation plays an indispensable part in our society: through it we can confirm, evaluation after evaluation, year after year, that neither equality nor the desired level has been reached. We thus get extremely indignant, demanding further measures, more programmes, more textbooks (preferably free ones), more training and information, and more evaluation, much more evaluation. Much, much more of it.

We have read neither standing up nor lying down, but sitting. In silence or out loud. Individually or collectively. And now each individual in turn must show that they are up to forming part of the group of textbook readers; whether they can join the homogeneous mass they aspire to or, in contrast, fall into the ranks of that other mass of those unwilling to assimilate their condition as equals, thereby imperilling the educational system for all. Let us show why we have been reading sitting down. We do it seated, in unison and in silence. We fix our gaze on the paper where the textbook once lay. Although exceptionally there may be occasions where the evaluation is performed out loud. In this case an individual is taken out from the rest, and the authority figure requests them to stand up and submit to questions. In this way the individual involved is doubly evaluated: both by authority and the body of their fellow learners, sitting silently as they await their own turn.

Whatever the results of an individual evaluation, whether or not the learner demonstrates a command of the memorised contents or is incapable of proving their reading skills, the educational system imposes a 'textbookist' vision of the world on practically all the individuals forming part of it. From the most primitive manifestations (such as pass notes and cribs) through to the most complex and voluminous note-taking in the higher reaches of academia (including its virtual and electronic derivations), this immense body of work shares the same general principles: the systematic ordering and formulation of knowledge to facilitate its transmission, reception and evaluation, the way in which authority is uncontested by readers (who tend to take everything on the page as true), and the gliding over of the fact that the textbook is actually only a means of transmitting knowledge rather than the knowledge in itself.

Under the worthy auspices of democratising knowledge the textbook imposes a simplified and simplifying vision of the world, both uniform and superficial, in which personal experience and reflection are substituted for accessibility and immediacy. This mode of knowledge monopolises the mass media, moulds public opinion and configures the political, economic and cultural opinions ruling our society with a cascade of projects, reports and powerpoints. 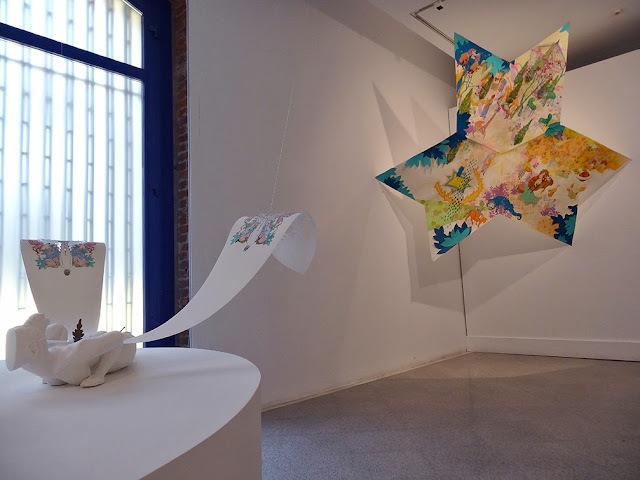 
What do we understand and fail to understand when we look at Leire Urbeltz's illustrations in the exhibition 'Plants that are not green'? We come across a model of representation that is familiar to us, we can follow its key, and have the necessary experience to infer that every image reflects a reality and seeks to transmit some information. We are even able to link each illustration with a science, discipline or specific field of knowledge. In other words, we are participants in the formal structure being reproduced, for the very reason that it is actually a textbook.

Nevertheless, these images of textbooks devoid of texts disturb us. They lack the comforting narrative which lends them sense, confirming their fictional nature and setting them in the realms of fantasy. The spectator may take on this imaginative exercise, and act as if these representations account for another world with its own laws and logic; they may take each illustration and make up their own personal jigsaw puzzle; or they may discover an archaeological dimension in them and wonder about the hypothetical author, about the trials and tribulations that were lived through in order to leave this enigmatic testimony in our hands. 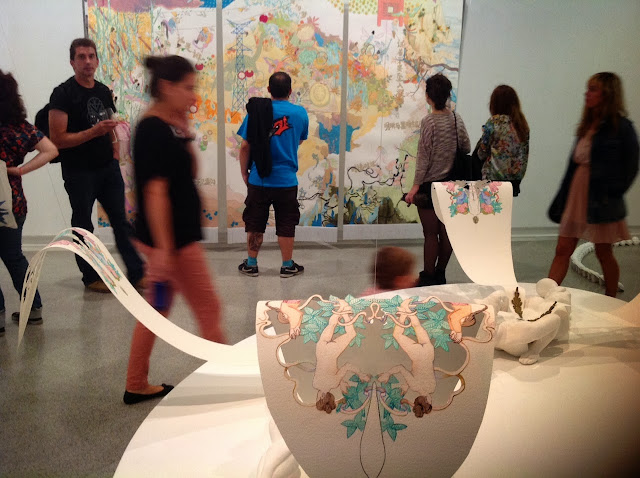 If the reader decides to head in this direction, if they join the game, what they will be doing is to endow a consciously empty formal structure with contents. This proactive spectator will be assuming, knowing or unknowingly, that Urbeltz has proposed a playful activity in which they may interact. A form of interaction that, incidentally, will not differ much from those commonly proposed in the pages of textbooks. An interaction that can even be itself evaluated.

Together with this play-like dimension, the exhibition also opens up another line of thought. This consists in questioning the model of representation and vision of the world imposed on the masses schooled through textbooks and the like. Is the experience of reading the illustrations that normally appear in our children's schoolbooks so radically different from the info-graphic diagrams of the press and news bulletins, or from reports and presentations at work? How close to reality is all the information, data and schemes which seem to guide our criteria and choices compared to the works in this exhibition? Why do we no longer seek a direct, empirical knowledge of things and merely put up with an impoverished vision, easily acquired and easily forgotten?

Let us ask ourselves, then, what is it that disturbs us about these illustrations, if they do indeed disturb us. Let us sit down for a moment to really look at the exhibition, and not be content with simply walking by the pictures. Let's sit down and talk. 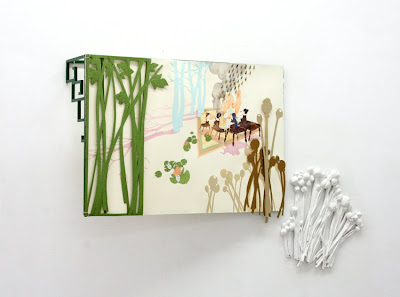 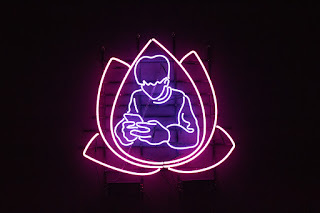